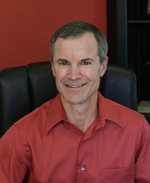 Andy is a native Californian and moved to Nevada County in 1974. In 1983, he graduated from UC Davis with a degree in fermentation science and took a job as a brewmaster in New York City. After an award-winning career with brewers such as Anheuser-Busch, Old New York Brewing Co., and Samuel Adams, Andy moved back to California in 1991 and cofounded Liquid Assets Brewing Systems, a manufacturer and worldwide installer of micro and pub breweries.

In 2000, Andy left the brewing industry and returned to UC Davis to earn a masters in business administration, which he completed in 2002. Since that time, he has been working with Kim at Full Circle Financial. Throughout his career, whether it is through better beer or exceptional financial service, Andy's goal has remained the same—a delighted customer. Andy handles many of the back office duties, keeping things running smoothly and assisting with any and all client needs . . . including beer recommendations.

Andy is a California-licensed professional fiduciary.

A recovered marathoner, he still enjoys an occasional jog, bike, or ski outing, and dabbles in the garage. When he's not texting his own kids, he volunteers with Child Advocates of Nevada County as a CASA (Court Appointed Special Advocate).